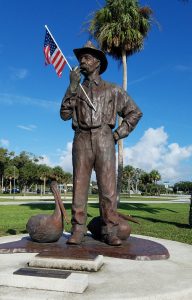 The first settlements in Sebastian date back to the 1880's when 40 pioneers migrated to a village south of the St. Sebastian River. First known as Newhaven, it was renamed Sebastian in 1884. Fishing was the mainstay of this small community and naturalists came to the area because of the St. Sebastian River, the Indian River Lagoon, and Pelican Island National Wildlife Refuge. America's entire National Wildlife Refuge System was first established in Sebastian in 1903, when President Teddy Roosevelt agreed to protect pelicans and other birds in a sanctuary known as Pelican Island by signing an order making it the first Wildlife Refuge in the country. Paul Kroegel, whose statute stands in Sebastian Riverview Park, became the first wildlife warden for Pelican Island National Wildlife Refuge. Today, the area still abounds in the same natural resources first recognized decades ago. Sebastian is now the largest municipality in Indian River County with a population estimated at 30,000. By the time of the "Gay Nineties" Sebastian, as well as Roseland, had a post office. With the arrival of Flagler's locomotives along with the development of icehouses for pack, commercial fishing became a stronghold in Sebastian. Fishing of the subsistence and recreational varieties had flourished in the area since the time of the Ais Indians. It didn't take long for the fishing business to expand. Sebastian had begun to emerge as a small fishing village by the end of the century. One of the original commercial fishing families, Archie Smith and Bascomb Judah, still operate from their original fish house located on Indian River Drive.

Today, Sebastian has a Working Waterfront that showcases the rich cultural history of the fishing industry. The fishing industry is alive and thriving today, along with plenty of water based activities, quaint river view lodging, and waterfront restaurants that offer up the local fish of the day! Whether its grouper, flounder, snapper, clams, Florida lobster, or blue crabs, you're sure to get your taste of fresh Florida fish!

The City of Fellsmere, to the west of Sebastian, enjoys a rich history. Noted as the first city to allow women to vote south of the Mason-Dixon Line after the reconstruction and the first in offering the convenience of packaged sugar in the state. Within Indian River County, Fellsmere boasts the first library, the Marian Fell Library, still here today, and the Town of Fellsmere Subdivision, as the first Master Planned Community. Also the first hotel, public school and railroad depot were built in Fellsmere.

More than any other event, it was the sinking of the 1715 Spanish Plate Fleet off the coast of Florida that gave the Treasure Coast its name. A fleet of twelve ships left Havana, heavy laden with Spanish treasure and was driven into the Florida coast by a hurricane between the St. Lucie and Sebastian Inlets. In 1988, not far from the Sebastian Inlet, treasure hunters found an estimated $300,000 in pieces of eight, jewelry and other artifact that had been waiting on the bottom since 1715.

Sabal palms, live oaks, egrets, pelicans, a river, a lagoon, a seashore - the abundant natural beauties of the Sebastian River Area are in large part why people move here. Most of early Sebastian was built on land between a river and a lagoon. And it was the proximity of those bodies of water that made the place so attractive to the early settlers. The St. Sebastian River is a freshwater tributary, fed by rainfall and by smaller creeks and rivulets that drain the land between the Atlantic Sand Ridge, which runs more or less parallel to the present day location of US 1 and the Florida East Coast Railway. With prongs running to the north and south, the river drains the basin between those sand ridges. It is the principal tributary of the Indian River lagoon in the Sebastian area. A western prong of the river, which existed when the area was settled, became part of the C54 drainage canal. The Indian River lagoon forms the eastern border of the Sebastian area, and the St. Sebastian River forms the western boundary.